You are here: Home / News / Advocacy

In addition to the updates from Sam, the newsletter will offer announcements of events, advocacy tips, templates for phone messages/email, news about legislative activities including Legislative Day (March 6, 2018), Legislative Forum (August 8, 2018), and other news & information you can use in your advocacy efforts. It will include updates on national library issues, too.

The mailing schedule is intermittent–it depends on what is going on at the Legislature and how it affects libraries.

The 2018 Legislative session starts February 20, 2018, and updates from Capitol Hill Associates will be posted here as well. The Legislative Update newsletter is a benefit to members of MLA and ITEM.

The following information was shared via email with the library community Tuesday, January 16, 2018 by Sam Walseth, Capitol Hill Associates, in his role as the MLA-ITEM lobbyist.

The Governor accepted a request from the MN Department of Education (MDE)
to fund $2.5 million to for Library Construction and Renovation grants.
While this is a good place for us to start the 2018 session we face an
uphill battle to get a bonding bill passed and signed into law. Competition
for bonding dollars is always fierce. There were over $3.3 billion in
requests submitted to the Governor?s office ($2.5 billion from state
agencies and $831 million from local governments).

For more details on the Governor’s bonding proposal: 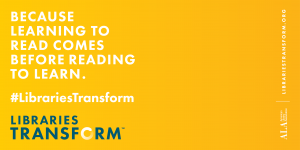 The Minnesota Library Association (MLA) is seeking entries in a “Because” statement contest. Based on the American Library Association’s (ALA) Libraries Transform campaign, they’re designed to increase awareness of the value, impact, and services provided by libraries and library staff.

As we prepare to advocate for Minnesota libraries in the coming year, we’re proposing a Minnesota spin on the Libraries Transform initiative and would like to create several uniquely Minnesota “Because” statements. We’re seeking submissions from library supporters. These statements can be about the services and value you see in any type of library (public, academic, school, government, and others). Your submissions will be collected and used for virtual library legislative week in Minnesota, March 5-9th, 2018. One lucky winner will receive a large print of your Minnesota Libraries Transform Because statement.

Need ideas? Take a look at the statements that ALA has created:
http://www.ilovelibraries.org/librariestransform

MLA’s Legislative Chair Jami Trenam, in a message to the Minnesota Library Legislative committee, said, “While the FCC is voting on the future of net neutrality on Dec. 14th, we can encourage Congress to put pressure on FCC commissioners.”

Please consider contacting 1st Congressional District Representative Tim Walz and Senators Amy Klobuchar and Al Franken. If you prefer, you may use ALA’s email tool instead. Subscribe to the Legislative committee listserv here.

The following information was shared via email with the library community Tuesday, June 6, 2017 by Sam Walseth, Capitol Hill Associates, in his role as the MLA-ITEM lobbyist.

While the Governor’s line-item veto of the legislature’s operating budget
means the people’s business isn’t quite finished, it is for our practical
purposes.

The final Legacy bill, signed into law, appropriates $2.5 million for
library legacy programming for the next two years.

If the courts decide against the legislature’s forthcoming lawsuit over the
line-item veto, it’s the Governor’s desire to revisit several items in the
Tax bill. Those items are related to commercial-industrial property taxes
paid to the state, tobacco taxes and changes to the estate tax. He’s also
indicated a desire to revisit the teacher licensure reform package passed in
the E-12 bill.

The 2018 session begins at noon on Tuesday, February 20th.

The following information was shared via email with the library community Friday, May 23, 2017 by Sam Walseth, Capitol Hill Associates, in his role as the MLA-ITEM lobbyist.

Early this morning the Minnesota Legislature adjourned their Special Session
‘Sine Die’ having passed the seven bills in the global agreement with Gov.
Mark Dayton. The bills detailed a $46 million budget including $650 million
reduction in taxes, $483 million for education, $300 million for
transportation and nearly $1 billion in bonding for public works.

All of the bills now will go to the governor for his signature or veto.
While the governor signed the global agreement that kicked off the special
session, there were few details in that original document. As a result,
activists, union leaders and some high-ranking DFLers are urging him to veto
all or some of the agreement.

While general expectations are that Gov. Dayton will sign or veto the bills
by the middle to end of next week, he has 14 days to consider the bills
passed in the special session after they’re presented to him. The
legislature has three days to present the special session bills to the
Governor.

The bonding bill contains $2 million for library construction and renovation
grants. There are no earmarks for these funds so an open grant process will
ensue at the MN Department of Education.

The following information was shared via email with the library community Wednesday evening, May 25, 2017 by Sam Walseth, Capitol Hill Associates, in his role as the MLA-ITEM lobbyist.

After a rough start to the special session last night, the House did finally
get the E-12 bill passed by a vote of 79-54. The bill was taken up by the
Senate this afternoon. Unfortunately, the Senate was short a majority member
and so couldn’t take up votes on the budget bills. Instead, they adjourned
until noon on Thursday. The House followed suit. All of the bills are now
posted and everyone has had time to review them.

DFLers are furious with what’s been negotiated in some of these bills. The
unions were out in force at the Capitol today asking them to “shut it down”
and for the Governor to “veto everything.” There’s definitely something to
love and hate in this package of legislation. I think everything gets passed
by both bodies by Thursday night and weary crew of 201 legislators will
leave St. Paul.

The bonding bill spreadsheet has been released and it contains $2 million
for library construction grants!!

Here’s a link to the bonding bill spreadsheet; we’re on page 1, line 30:

The following information was shared via email with the library community late Tuesday evening, May 23, 2017 by Sam Walseth, Capitol Hill Associates, in his role as the MLA-ITEM lobbyist.

The Governor called the legislature into special session to process their
global budget deal they negotiated late Monday night. We’re just starting to
see some of the omnibus bill get posted for public review. The Tax bill and
the E-12 bill are out. Unfortunately, our request to increase funding for
the regional library systems was not included.

The bonding bill hasn’t been posted yet. The global agreement calls for a
$990 million bonding bill.

The following information was shared via email with the library community on Friday, May 19, 2017 by Sam Walseth, Capitol Hill Associates, in his role as the MLA-ITEM lobbyist.

Rep. Mary Kunesh-Podein, freshman DFLer from New Brighton, is a school media
specialist and she introduced a bill this morning in the House that would
create a state funded grant pool that school districts could apply to for
purposes of hiring a school media specialist. In speaking with her the other
day she wanted to get the bill introduced late this session so it’s out
there for people to review and discuss over the interim with the goal of
having the bill refined for action next session. Take a look at the bill
language here:

In an effort to keep the process moving forward this last weekend of
session, GOP leaders just announced a global budget offer along with
instructions to their committee chairs to begin work on coming up with
omnibus budget bills. Speaker Daudt and Majority Leader Gazelka said they
absolutely want the Governor and his commissioners engaged in the process
this weekend and said these budget targets are still negotiable. They noted
that they left $86 million on the bottom line that could be used to help
close things up. They are committed to passing another round of budget bills
by midnight Monday with the hope that they are sufficient to get the
Governor’s support.

Their E-12 offer is now up to $467 million, still short of the Governor’s
last offer of $507 million. However, a $40 million difference tonight is
much better than the $400 million difference we started the week out with.
They didn’t expound on details of each budget area and said they want their
chairs and the commissioners to hammer out the details. Which early
childhood programs to invest in will be the hardest piece of the puzzle for
the GOP and DFL negotiators to come to agreement on. There is also a
question about what to do with a pension fix for the Teacher’s Retirement
Association (TRA) and whether or not that needs to be included in the E-12
bill.

I will send out updates this weekend as best as I can and certainly if we
have details of the E-12 bill.

Almanac should be interesting this evening.

The following information was shared via email with the library community on Tuesday, May 9, 2017 by Sam Walseth, Capitol Hill Associates, in his role as the MLA-ITEM lobbyist.

Legislative leaders met through Saturday and while the tone seemed cordial
there’s little progress to report on. With two weeks left, this is the week
for the GOP to either send some or all of their budget plan to the Governor
where he’s promised to veto them. That would leave the last week of session
to hammer out a deal to avoid a June special session.

The Tax bill is a major source of contention and perhaps the bill the GOP
would like to draw a stark distinction with DFL Governor Dayton. Dayton is
supporting some $300 million in tax relief, while the GOP tax cut plan is
$1.15 billion in size. In scope, the GOP plan includes tax credits for
donations to private scholarship funds, and item Dayton has recently
publicly committed to vetoing.

Competing spending levels and early learning strategies are once again tying
up progress on the E-12 bill. The GOP is poised to repeal Dayton’s voluntary
pre-K (VPK) program in exchange for a smaller amount of funding on early
learning scholarships. The Governor will go to the mat to save his VPK
program. It’s unclear how leadership will end of resolving this issue.

It would be good for local library officials to touch base with their
legislators in the next day or two to remind them of the importance of our
requests for:

Please send me a note if you want advice on which issues are more
advantageous for you to talk to your legislators about. Some are more
engrossed in certain bills than others, especially the chairs.